The History of Bathrooms and Bathing

Bathrooms today focus on sheer luxury and we certainly expect it to be completely sanitary, private and comfortable – quite different compared to 3000 B.C. Although we humans have always needed to go to the toilet and wash, the concept of a bathroom that offers flushing toilets, warm water and ventilation, is only a relatively new revelation. This process has taken centuries to form the ultimate room made purely for today’s modern culture.

Bathing and toilets throughout history:

Well known for their Roman baths, public bathing was a tradition usually performed by the middle and upper classes, this typical ritual offered people a chance to cleanse and socialise – for some, a chance to up their social status. Similar to how we would play a sport or join a country club to become well known within the elite circle. Although Roman baths were seen as a public activity, men and women had to bathe separately. 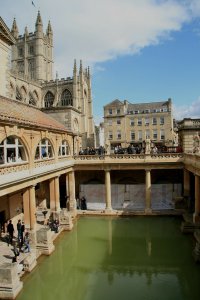 Roman baths were inspired by the Ancient Greek bathhouse construction, which is reflected in their large-scale facilities i.e. large public baths. If you were to draw a typical plan of the Roman baths, there would be a large middle section and a few smaller rooms stemming from this, these would include a reception area, a hot room and a cold room.

Roman baths generally took advantage of hot springs nearby and quite rightly so – as it’s certainly an ideal supply for both public baths and fresh drinking water. These thermal baths were incredibly important to society as you would also find libraries and gardens in the surrounding area; as well as being a therapeutic and cleansing experience, it was an educational place too.

Public toilets were also in use but there wasn’t any privacy, merely a hole in large stone walls situated outside, called squat toilets. Portable chamber pots were also available but mainly used in large social gatherings. 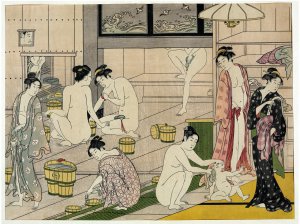 For religious and social reasons, bathing was encouraged because the culture at this time was highly geared towards religion and religious ceremonies. During these ceremonies, bathing would be performed by many, to achieve deep meditation with the aim to clear the body and mind.

Amongst the large variety of luxury baths, charity baths were commonly found in Medieval Japan and these were supplied by the rich and given to the poor as a kind gesture. However, different types of bath depended greatly on the geographical locations opposed to where the rich resided. The different types included:

By the Victorian era, plumbing was beginning to be implemented into new buildings. For these new homes, a water closet with plumbed water was a brand new revelation and although this increased cleanliness, privacy and convenience,  the behaviour of the Victorians, especially the women, remained pretty much the same. It was seen as inappropriate and immodest for women to be seen going to the toilet and impractical due to their fashion, i.e. their large hooped skirts and so, for many, the chamber pot was their only method.

Despite this old-fashioned attitude, plumbing became highly sort after once it was realised to be a necessity – not only to free up public space but to pursue more sanitary conditions. Plumbing and private toilets became essential for all homes, for both the rich and the poor.

Today the idea of having to share the same bath water like they did in late 19th, early 20th century might be enough to make one shudder, as we live in an era of luxury where many homes 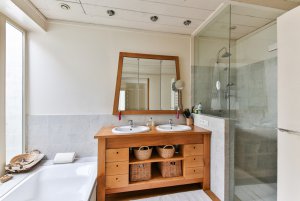 commonly have more than one bathroom. With ensuites and small water closets so standard, our entire attitude towards bathing still encourages us to relax, unwind and find complete tranquillity – just in the privacy of our own homes. Today we rely on technology to heat our water, lights to turn on and off with sensors, in-floor heating to keep us comfortable, bath jets to soothe our skin and multiple shower heads for a luxurious spa experience.

At Quality Bathrooms we believe that quality bathrooms are a must, which is why we only supply quality products to ensure we meet all budgets and needs. If you’re looking for flawless fittings and a first-rate service turn to our friendly team today who can offer you expert advice and help with planning and design. We operate throughout Brigg/Barton, Gainsborough, Epworth, Selby, Lincoln, Grimsby, Goole and Misterton.